Some 500 New Zealand books and pamphlets focusing on early Māori and European settlement in New Zealand are included in the unique Balneavis Collection. Gifted to the Turanganui Public Library in 1958, the collection was kept in cabinets specially made for it when in the care of the Department of Māori Affairs.

The collection, well known by scholars throughout New Zealand, was started by Raumoa Balneavis during a distinguished career in the public service. It was built up “with care and imagination” by Judge Carr and his Māori Land Court colleagues.

Raumoa was the son of Jack Balneavis and Lina Wilson of Muriwai and had links with Ngai Tamanuhiri as well as Whakatohea through his grandfather Colonel Henry Colin Balneavis, who married a woman from Opotiki. Colonel Balneavis was born in Ghent, Belgium in 1818, and came to New Zealand in 1845 in command of the light company in the 58th regiment. He was an accomplished violinist and a founder of the Auckland Choral Society.

Raumoa Balneavis was born in 1880 and educated at Te Aute College in Hawke’s Bay. Early in 1900 he became an expert interpreter, entering into partnership with Charles Ferris as native agents. Five years later, in 1905, he joined the Public Service, working as private secretary to then Chief Judge of the Native Land Court Jackson Palmer.

His industry, discretion and knowledge of Māori issues ensured he remained in the position until 1940, when he collapsed and died in the corridor of the second floor of Parliament House.

He used his position to quietly influence the Minister to move towards positive policies. He was awarded the MVO (Member of the Royal Victorian Order) in 1927 for long and distinguished service.

Through his 34 years in official service, he was known simply as “Bal”. He served as private secretary in the Native Department under five governments and in association with eight ministers. The Māori people had known that, so long as he was there, no Minister would lack a source of authoritative information on matters vital to their race.

On his death, Apirana Ngata said, “No man of his time so assiduously studied the Māori human field of both islands or mastered so well the intricacies of Māori problems. His knowledge of human and material factors – controlled by a naturally unflurried, cautious and well-balanced judgment – made him invaluable to the ministers and administrations he served”.

In 1947 the Tairāwhiti District Māori Land Board (a branch of the then Department of Māori Affairs) bought the Balneavis Collection for £119. Balneavis’s own books formed the nucleus of this, supplemented by purchases funded by the Māori Purposes Fund Board.

Apirana Ngata, who promoted the idea of setting up a memorial library, sent his son Henare K Ngata a list of books for which he was to bid at Bethune’s in Wellington. Further purchases to the value of £86.10s were made from the estate of a Mr Cata in August 1947. Together the two collections became known as the Balneavis Library. Subsequent purchases over the next two years resulted in a collection that by 1952 was valued at £717.2.1d.

Additions to the library were a result of the interest and enthusiasm shown by Gisborne Māori Land Court Judge Harold Carr.

The Tairāwhiti District Māori Land Board was dissolved in 1952 and the library placed in the care of the Māori Trustee, who decided the collection should stay in Gisborne and be supervised by a committee of local Māori elders and personnel from the Māori Land Court. A committee elected in January 1955 comprised Judge Norman Smith (chairman), Judge Carr (deputy chairman), R C Trueman (secretary), Vic Holst, Eru Ruru and Henare K Ngata. Few additions were made to the collection after 1952, although the Library Committee continued a journal subscription to the Polynesian Society, as begun by the Land Board. These, and the donation of a souvenir booklet of the opening of the Tuwhakairiora Meeting House by the elders of Wharekahika, were the only recorded additions to the collection until it was gifted to the Turanganui Public Library.

The collection was housed at the Department of Māori Affairs in Gisborne and entrusted to a custodian with no previous library experience. Early in 1958 Department of Māori Affairs head librarian Mr Lynn travelled to Gisborne to catalogue the collection for the first time. A number of factors contributed to the collection being gifted to the Gisborne Library. It was difficult to find an officer prepared to act as librarian, and restricted office hours meant the library was not as readily available to the public as the committee entrusted with its care had intended.

Judge Carr, who believed the books would be useful to a wider public if housed in the Gisborne public library, was instrumental in obtaining the collection’s transfer to the library. After the committee unanimously decided in April 1958 to offer the collection to the Gisborne library, subject to certain conditions, the Māori Affairs Department handed it over in October 1958. The books were immediately of real use to interested borrowers. The books, pamphlets and periodicals are classified according to generalities, religion, social sciences, pure sciences, technology, the arts, literature, general geography and history.

Twelve books are examples of New Zealand fiction, ranging in date of publication from 1891 to 1951. They are the work of such authors as Henty, Bright, Tua-O-Rangi, Brown, Butler, Grace, Hall, Melville and Reed.

The biography section includes the lives and reminiscences of such notable New Zealanders as Apirana Ngata, Donald MacLean, Gilbert Mair, George Grey, John Gorst and James Stock. The memoirs of Sir William Herries are of particular interest, being privately printed in London in 1925.

The retrospective cataloguing and processing of the collection in 1995 – 96 gave the public improved access.

Since a separate fund was not established for the addition of material or the preservation of the original contents, the Balneavis Collection became a closed collection. The only additions were the replacement of several important lost items, the subscription to the Polynesian Journal and a donation of two small second-hand books from the Life Science section of the main library.

The emphasis on acquiring material of early New Zealand history, both Māori and European, as originally contained within the Balneavis library was transferred to the reference section of the main library.

Since 1988, when Pene Walsh was appointed head librarian, new material has been actively added to the collection. This includes everything local, including fiction, with Māori content; the Journal of the Polynesian Society; and material with important content related to Māori history and ethnology. New cabinets were required and in place during 2000.

She says: “It’s a living collection. We want to keep the Balneavis Collection alive with the intention of it always being of historical interest to future generations of people from the Gisborne district. 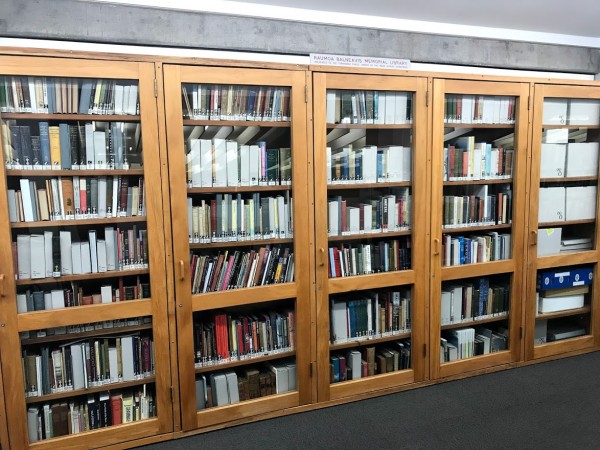